Some sectors of German industry may have to brace for a substantial drop in revenues due to Brexit. Overall, the UK’s impending departure from the EU will affect German foreign trade less than it will other economies, especially Germany’s neighbours Belgium, Switzerland and the Netherlands. These are the findings of an initial analysis included in the latest Country Index for Family Businesses, which the Centre for European Economic Research (ZEW) in Mannheim carried out on behalf of the Foundation for Family Businesses. According to the analysis, the pharmaceutical industry in Germany is the sector that will suffer the most severe impact, owing to its high level of dependence on exports. But several areas of the transport industry – such as the aerospace and railway construction sectors – also appear to be vulnerable because of their high exposure to import risks.

“Germany, as an export nation, must confront its foreign-trade risks more than it has in the past. Even though the economy may be performing well at the moment and tax receipts continue to flow, no one can really say what ramifications Brexit will ultimately have for Germany. In any case, none of us should rely on the monetary policy of ECB President Mario Draghi,” said Prof. Brun-Hagen Hennerkes, Chairman of the Executive Board of the Foundation for Family Businesses.

The Country Index was compiled for the first time in 2006 and is updated every two years. Against the backdrop of Brexit, foreign-trade risks were selected this year as an additional focus of the Country Index. In addition to the problems already outlined, the experts expect Germany to encounter difficulties with computers, electronic and optical products as well as in the textile and clothing industry. By contrast, the diversified structure of the foodstuffs and mechanical engineering industries appear to offer better protection against the Brexit impact. Hennerkes further explained: “This study is another prime example of the significance of family businesses for the German economy and the need for policy makers to take notice thereof – to be better equipped for setback phases.”

There is still no definitive date for when the UK will leave the EU. British prime minister Theresa May has announced that her government will lodge the official application before the end of March 2017; however, negotiations are expected to drag on for several years.

In the opinion of Prof. Friedrich Heinemann, head of the research area Corporate Taxation and Public Finance at ZEW and responsible for the Country Index, the latest studies reveal that, “among all the major European economies, Germany is particularly vulnerable to foreign trade shocks” because its economy is characterised by a great degree of openness. “However, these risks are mitigated by its high level of diversification regarding trading partners and industries.”

In Heinemann’s view, the UK’s departure from the EU will definitely have a noticeable impact on the overall structure: “One possible effect of the UK’s departure could be that the post-Brexit EU might be more prone to succumbing to protectionist tendencies.”

On the whole, the study reveals that larger European economies such as Germany are less vulnerable to foreign-trade shocks than medium-sized or small ones. For example, Brexit will have significant repercussions for Ireland, whose economy is highly integrated with that of the UK. By comparison, a country like the United States is better protected owing to the size and vitality of its domestic economy. In addition to Ireland, the countries most at risk from Brexit are Belgium, the Netherlands and Switzerland, since the UK is a significant trading partner. 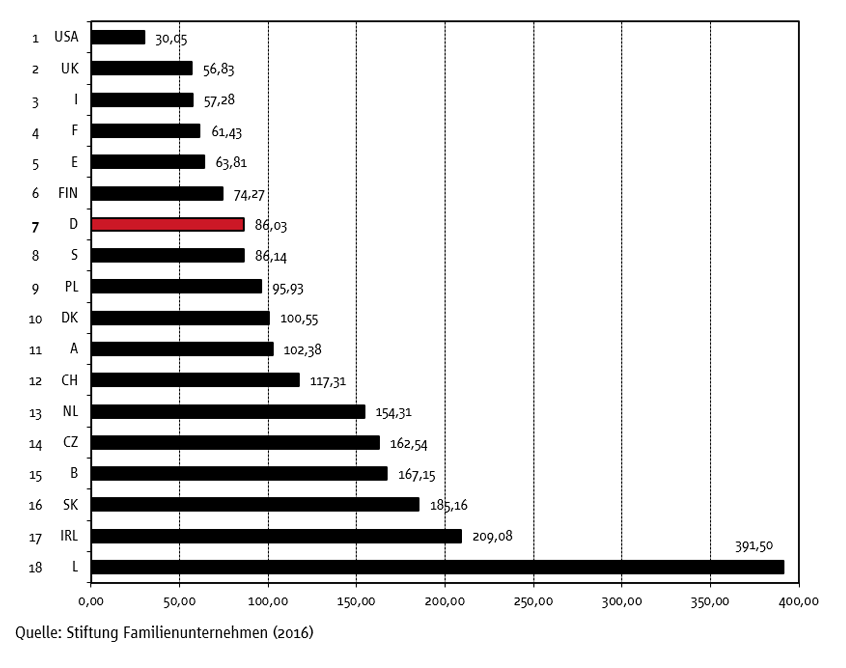 The Country Index is based on pertinent national and international studies, which are analysed to determine to the attractiveness of a particular location for large family-owned enterprises in the manufacturing sector. The index assumes a model family business with an annual turnover of €210 million.

The Foundation for Family Businesses