In recent years, legislators have passed a number of new regulations that compel companies and their shareholders to publish previously confidential information. Many of these regulations can be traced back to the European Union.

They affect not only large multinationals, but also numerous family businesses. The Foundation for Family Businesses has commissioned analyses of several of these initiatives and also examined the growing number of disclosure obligations from the perspective of data protection. 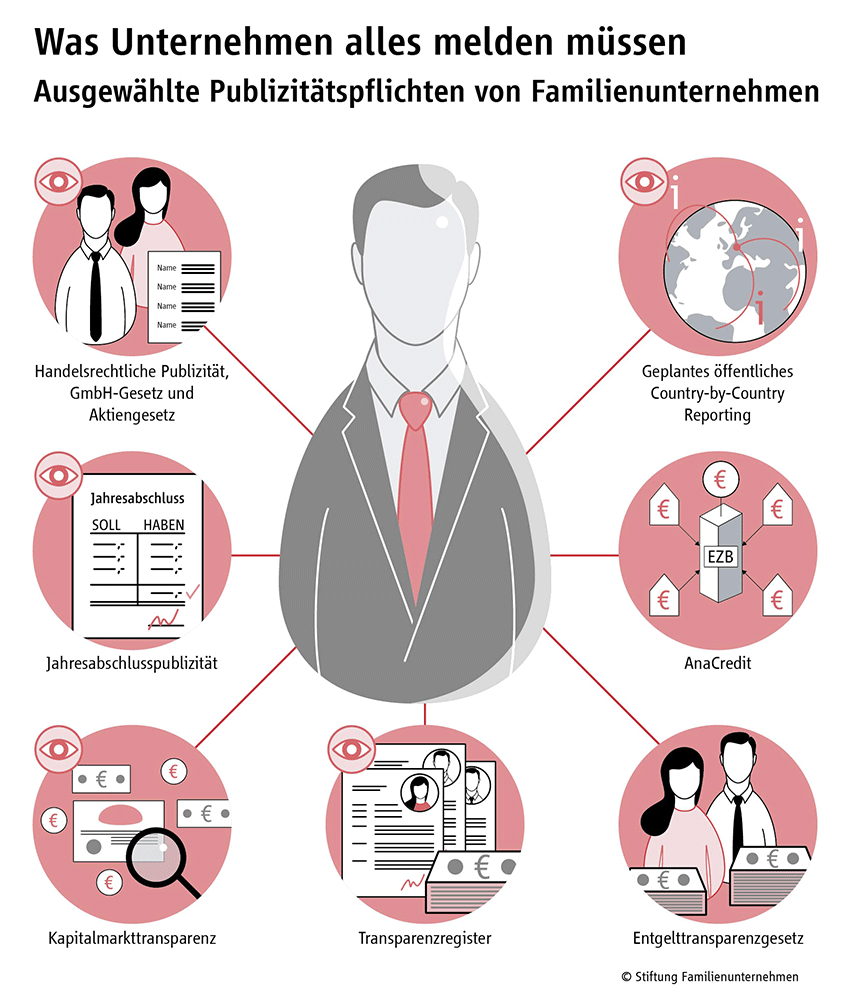 In recent years, numerous new disclosure obligations have been introduced for companies and their shareholders. The following are a few examples:

The Transparency Register that has been in force since 27 December 2017 contains around 55,000 entries for companies operating in Germany as well as their “beneficial owners”. Entries must be made for all shareholders of corporations, cooperative associations or foundations who control more than 25 percent of an entity’s capital or voting rights. Failure to make an entry in the register is punishable by fines of up to 100,000 euros – or as much as one million euros for serious breaches.

A large group of people who can prove they have a legitimate interest are entitled to view the entries, and may include NGOs, journalists and tenants. However, the EU finance ministers have already agreed to make the register freely accessible as of 2020.

The purpose of the transparency register is to help combat money laundering and the financing of terrorism. However politicians are already debating whether the register is fit for this purpose. According to media reports, 3,132 applications to view the register were made in the first six months of the year alone – and only 60 of them were lodged by the authorities. Prof. Brun-Hagen Hennerkes, Chairman of the Foundation for Family Businesses, rates this as evidence that the transparency principle is being abused: “The high number of applications stokes concerns that the main purpose of the register is to throw light on the private affairs of the shareholders of family businesses.”

The Competition Register is accessible only to the authorities. It contains entries on companies in which white-collar crimes have been committed, including bribery, money laundering and fraud at the expense of the public purse, tax evasion as well as breaches of antitrust law, the Act to Combat Clandestine Employment or the Minimum Wage Act. The prerequisite for an entry in the register is a conviction or fine for such crimes. Public authorities issuing tenders are obliged to consult the register before placing any order with a bidder if the amount in question exceeds 30,000 euros.

The danger of such a register is that family-business owners who are not directly involved in operations may find themselves pilloried without justification. In many cases, their family name is identical to the name of their company.

European family businesses may be at a competitive disadvantage if the European Commission unilaterally goes beyond the country-by-country reporting (CbCR) formulated in the BEPS project. In the course of the latter it was agreed to introduce an obligation for multinational companies to report a range of country-specific data to their respective national tax authorities. Going a step further, the European Commission has proposed publishing this data on the Internet. Such a move would weaken the competitive position of family businesses with international operations. By having to publish this sensitive data, they would be disclosing their cost structures to their customers, suppliers and competitors. Any solo effort on the part of the European Union would undermine the global fight for fair taxation, as a study by the Centre for European Economic Research (ZEW) on behalf of the Foundation for Family Businesses reveals. (For more information, see Internationalisation.)

A further register introduced as part of the European banking union also contains internal company data. It is called Analytical Credit Datasets, or AnaCredit for short. A reporting system of the European Central Bank (ECB), AnaCredit is used for the supervision of banks and for preserving financial stability. Commercial banks operating in the eurozone must report up to 89 attributes for all loans they issue in excess of 25,000 euros per borrower. They include full details of the borrower – though currently this applies only to legal entities. AnaCredit is still in its initial phase of implementation. The basis for its introduction is a regulation (EU 2016/867) published by the Governing Council of the ECB on 18 May 2016. The register is not accessible to the public.

For reporting periods beginning on or after 17 June 2016, auditors must comply with new EU requirements: since that date, annual and consolidated financial statements must contain an individually formulated, expanded auditor’s report. Previously, auditors could use standardised templates. Now, audit issues of particular importance must be explained in detail in the auditor’s report. As a result, information previously known only within the company is now released into the public domain. If a German company’s annual financial statements are not followed by an expanded auditor’s report, the managing director may be held personally liable and fined up to 50,000 euros.