If Germany were to introduce a wealth tax during the next government’s term of office, it would become one of only three countries in the EU to have both a wealth tax and an inheritance tax in place. “The interplay of income, wealth and inheritance taxes could result in a confiscatory burden and effective tax rates of over 100 percent,” says Prof. Christoph Spengel of the Centre for European Economic Research (ZEW). “In that case, any return on assets would be completely eaten up by taxes, and business owners would have to erode their business assets to cover the remainder of the tax payment,” says Spengel, summing up the results of a recently published study entitled “An international comparison of wealth taxes”, which the ZEW conducted on behalf of the Foundation for Family Businesses.

Compared with other types of companies, family businesses are at a disadvantage because, on average, the owners have to pay inheritance tax every 30 years when the business is passed on to the next generation. Although legislators included relief options in the design of the new inheritance tax laws, the exemptions are subject to conditions, some of which are almost impossible to meet or are counterproductive. For instance, business owners are limited in the amount of liquidity they can withdraw from business assets over long periods. “Yet like the inheritance tax already in place, a wealth tax would force family-business owners to liquidate business assets on a regular basis, as generally they have no other way of making their tax payments,” says Prof. Rainer Kirchdörfer, a member of the Executive Board of the Foundation for Family Businesses.

Moreover, the effective corporate- and trade-tax burden has risen by a good two percent for German companies since 2009 although it has dropped by five percent on average across the EU. “Overall, Germany has already fallen well behind in EU-wide tax comparisons due to the fact that its tax framework has remained unchanged for years,” warns Spengel, the author of the study. 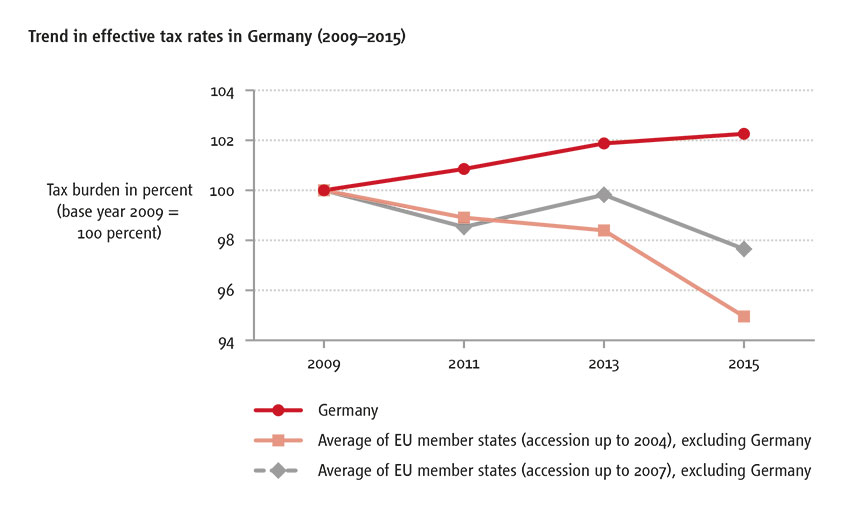 The study confirms that the reintroduction of a wealth tax in Germany would run counter to the long-term trend worldwide. Just five of the 31 OECD countries surveyed still levy a wealth tax, which in some cases makes up only a per-mille amount of the overall tax take.

Depending on its design, the reintroduction of a wealth tax in Germany would seriously disadvantage especially the country’s family businesses, both in terms of the lower tax burdens in other countries and when compared with non-family businesses in Germany. In the opinion of the academics behind the study, it would make more economic sense for the state to eliminate the deficits in collecting the existing 42 different kinds of tax rather than to introduce a 43rd tax – with all of the burdensome administration that this would entail.

The ZEW study “An international comparison of wealth taxes” can be downloaded immediately from: www.familienunternehmen.de