Germany continues to fall behind in international competition. In a current comparison of 21 industrialised countries, Germany’s ranking dropped three places to 17th compared with 2018, thus achieving the worst score in the history of the Country Index for Family Businesses. The United States, Great Britain and the Netherlands claim the top positions.

Germany is clearly lagging when it comes to the location factor of taxes. ”Germany’s passive approach to tax policy is becoming noticeable”, concludes a study prepared by ZEW Mannheim for the Foundation for Family Businesses, One of the great strengths of Germany’s attractiveness as a business location is the financial stability provided by the country and the private sector and favourable financing conditions associated with this. The Country Index was prepared for the first time in 2006 and since then, Germany has fallen back five places. This represents the worst development of any location surveyed.

“These results have to serve as a wake-up call”, says Professor Rainer Kirchdörfer, Executive Board member of the Foundation for Family Businesses. “In recent years, we have focused very strongly on the distribution of wealth, but now there is an urgent need to make Germany more competitive. The Country Index clearly identifies the priorities: We have to become competitive again in tax matters, reduce energy costs and invest in the inadequate infrastructure.”

Germany achieved the worst results in relation to taxes, ranking second to last among the industrialised countries at 20th place, ahead only of Japan. This is primarily due to the high business taxes in Germany. Other countries such as the United States, France and Belgium have significantly improved their competitive position by implementing tax reductions.

According to the study, Germany comes in 18th with respect to labour costs, productivity and human capital owing to “significant location weaknesses”. In terms of regulation, which measures various factors including the extent of bureaucracy in the particular country, Germany ranks in the middle (12th place). While Germany did improve slightly with regard to energy, its current 14th place is still below average, which is primarily attributable to high electricity prices. Security of electricity supply only offsets this to a limited extent. Germany’s performance in the infrastructure and institutions category is above average (8th place), but this score still represents the severest setback. Its digital infrastructure in particular is regarded as inadequate.

In terms of financing, Germany has excellent scores, taking a clear first place in the overall ranking in this category, with a positive contribution from the low rate of private and public debt. The heavily indebted eurozone countries from the south, namely Italy, Portugal, Spain and France, are at the bottom of this category.

The United States managed to climb to the top, taking first place in the overall ranking, due in large part to the tax reform implemented in 2018. This included, for example, reducing corporate tax rates at federal level from 35 to 21 percent. Furthermore, the United States achieves excellent results in regulation, financing and energy.

Great Britain ranks second place in the Country Index; however, the decision in favour of Brexit has had dire consequences, with no other country suffering such a dramatic drop in points. The scores for infrastructure and institutions were hardest hit by Brexit-related uncertainty. Nevertheless, the United Kingdom fared very well in labour costs, productivity and human capital and regulations. By contrast, the results were only average in the areas of taxes and energy.

Finally, the very poor image delivered by Spain – and now Italy, to even greater degree – remains virtually unchanged, with both countries bringing up the rear of the rankings. The Country Index reveals the priorities these states must address. In addition to poor infrastructure, these mainly include the low performance of the educational system and the excessive regulation of the product, goods and labour markets. Moreover, if these countries fail to capitalise on the opportunities presented by the EU coronavirus aid by implementing consistent reform policies, this could give rise to a new European debt crisis.

A look back at the development over the past 14 years is of interest: The industrialised countries exhibiting the most positive development throughout the period when the study has been conducted are the Netherlands (up seven places), Poland (up six places) as well as the Czech Republic and the United States (each up four places). Germany (down five places), Sweden and Switzerland (down three places each) displayed the poorest development.

The weakening of the rule of law, particularly in Poland and Hungary, is reflected in their very bad and still-declining scores for anti-corruption measures and legal certainty. “The Country Index for Family Businesses demonstrates that the weakening of the rule of law is not just a serious problem for democracy, but ultimately can also damage the reputation of an investment location,” says Prof. Friedrich Heinemann, author of the study.

The results of the study underscore the huge need for action. “The Country Index clearly shows that Germany now lags behind European and US competitors with respect to the tax burden of businesses,” the study concludes. In the short term, it would advisable to introduce extended loss carry-backs to offset the economic impact of the coronavirus crisis. “Comprehensive tax reform in Germany is essential to remain competitive in the long term from a taxation perspective.” 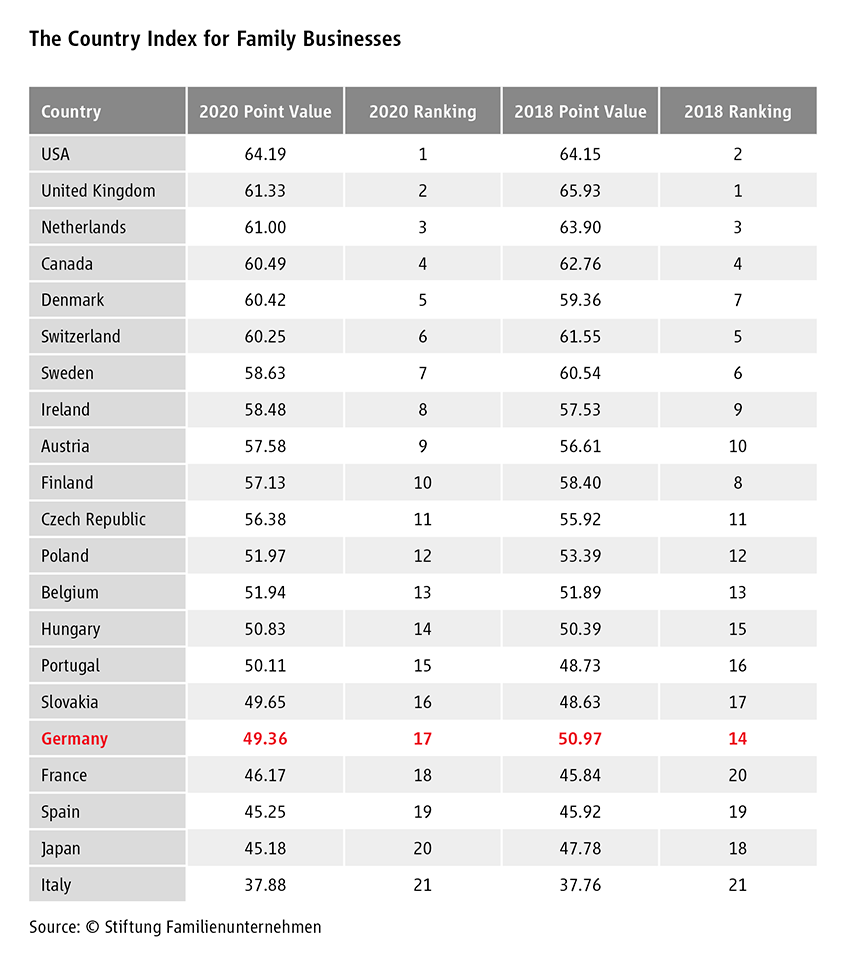