The world’s states must move closer together in their trade policies and dismantle trade barriers. This would be the correct response from the European Union to the new geopolitical reality according to the study “European Trade Policy at the Service of Geopolitics?” published by the Foundation for Family Businesses. This study was prepared by Professor Gabriel Felbermayr, the director of the Austrian Institute of Economic Research (Wifo).

Foreign trade policy is intended to contribute to securing peace, as western countries have made clear with their tough economic sanctions against Russia and Belarus. As a major export country and an important industrial location, Germany will feel the consequences of these sanctions most strongly. This is why it is crucial to intensify trade with other parts of the world, including the USA. And the EU-US Trade and Technology Council (TTC) in particular offers a platform for this aim, says Felbermayr.

The study calls for a rules-based, transparent sanctions policy that companies can prepare for. This is the only way the EU can credibly hope to sustain such sanctions and the only way to safeguard the economic strength of European countries, which, in turn, keeps them strong from a foreign policy perspective as well. It is important not to drift into protectionism; the assumptions of an open foreign trade policy must continue to be upheld.

Professor Rainer Kirchdörfer, Executive Board member of the Foundation for Family Businesses: “Family companies have shown that they support economic sanctions against Russia and are prepared to bear the consequences. But they are frequently internationally oriented and need free and predictable access to international sales markets. There is a growing tendency in Europe towards segregation and the politicisation of all foreign trade. However, such a development is certainly not in the best interest of Germany’s export-driven economy and its employees, as it has negative consequences for our social market economy.”

Even before the war in the Ukraine, it was evident how strongly trade barriers were on the rise around the world. 2021 saw 1,700 new protectionist measures enacted – a record number that is eight times as high as 2009. Germany ranks second only to China as the country that is most often the target of discriminating trade practises.

However, the EU itself is not a benign player when it comes to trade policy: Brussels is trying to use foreign trade policy instruments to achieve non-trade-related goals – however sensible these goals may be. Examples include human rights, environmental policies and social programmes, notes Felbermayr. Economic sanctions are also increasingly being employed as a substitute for foreign-policy measures, which leads to high economic costs. Family companies in particular are dependent on the international division of labour.

The study also criticised plans to impose a carbon border adjustment mechanism: “The Carbon Border Adjustment Mechanism will be largely symbolic.” It would be more promising if countries that share ambitious climate goals would band together as a climate club that would acquire further members as quickly as possible. The study also issued a warning about interventionist policies. Measures like the European Chips Act reek of dirigisme, it said. The study suggested that a better approach would be to encourage cooperative action among countries and create open markets. 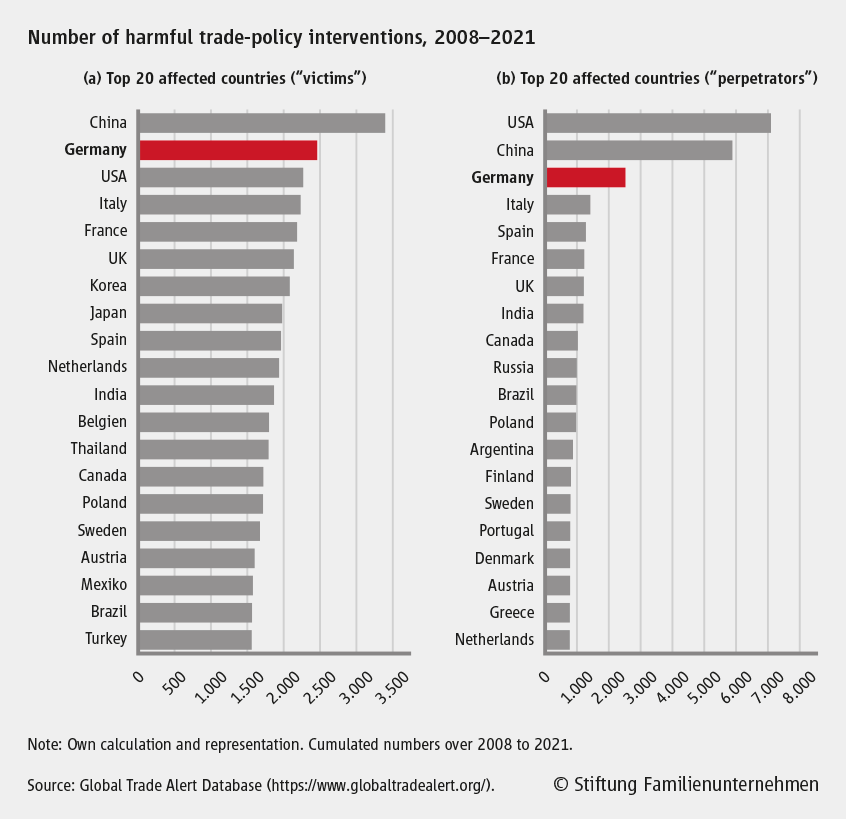 The non-profit Foundation for Family Businesses works to preserve Germany’s family-business landscape. The foundation is the most important promoter of academic research in this field and first port of call for politicians and the media in matters related to economic policy, legislation and taxation. The foundation founded in 2002 is now supported by more than 500 companies that rank among the largest family businesses in Germany.